Along with cats, reptiles, and fish, dogs are some of the most commonly-encountered and beloved pets in the state of California. In fact, Pawlicy Advisor found that nearly 40% of California households owned at least one dog in 2020. In contrast, the same study found that only 22.9% of California households own a cat. When properly trained, socialized, and monitored, a dog can provide countless benefits to their adoptive family. They can serve as faithful companions, protect their owner from threats, or even serve as emotional support animals.

However, even the most gentle and well-trained dog can cause massive damage when provoked, particularly if they attack or bite a small child. To better understand how dog attacks deal damage and when they occur, we performed an in-depth analysis of bite attacks in California and the greater United States.

To quickly reach the data gathered at any specific section of this study, simply click the corresponding link below.

How Strong is a Dog’s Bite?

When the phrase “dog attack” comes to mind, you probably aren’t thinking of the neighbor’s Chihuahua as a likely culprit. Generally speaking, the larger the dog, the more powerful their bite. However, even if a dog has a strong bite, this does not mean they are any more likely to attack. A dog’s role, training, and temperament offer strong indicators of their potential to bite, and owners should always be very familiar with their pet’s warning signs.

Bite force is calculated in “Pounds per Square Inch,” or PSI. This is a measure of all the pressure applied to one square inch of a pound. When it comes to animals, this describes the force that is applied through a bite. For example, a human’s bite force typically falls between 120 and 140 PSI, while that of a mature grizzly bear is about 1,250 PSI. No dog’s bite force comes even close to the strength of a bear, but some of the strongest canines can nonetheless cause damage when startled or provoked. The ten breeds with the strongest bite force are:

Who is Most at Risk of a Dog Attack?

According to research done by Psychology Today, children below the age of 15 are the victims of nearly three out of five dog attacks. Children aged five to nine are the most vulnerable of this group, and roughly 67% of these young victims are boys. One of the factors that increases the risks for children is that they are oftentimes unable to identify a canine’s body language accurately.

In a study of children in the Czech Republic, a dog’s emotions were correctly recognized only 17% of the time. Two of every three children in the study were unable to identify when a dog appeared afraid, and only 8% of the participants recognized threat indicators (as seen below). A fearful, worried dog is most likely to attack, and the fact that children are unable to recognize these warning signs puts them at increased risk of harm. With proper adult supervision, the likelihood of a serious bite attack can be reduced. 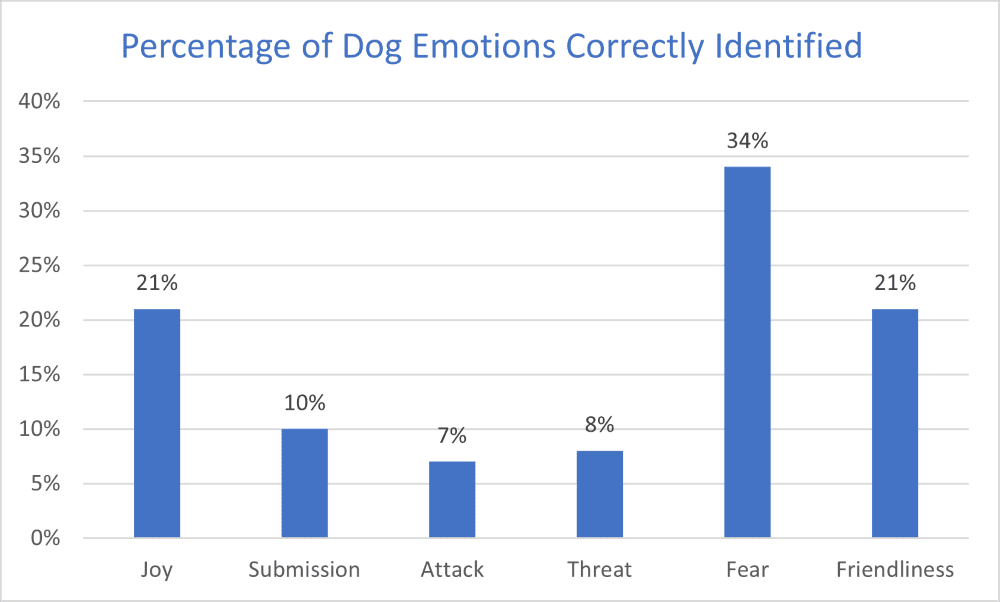 Which Dog Breeds Are Responsible for the Majority of Reported Nonfatal Attacks?

Using data gathered between September of 1982 and December 31st of 2014, we can get a sense of which dog breeds have historically been responsible for maulings in the United States. Please note that these figures have not been adjusted to prevent an attack from being listed more than once if the responsible dog is a mixed breed; therefore, we have included a “totals” row to track the number and severity of reported incidents. As an example, “pit bulls and mixes” caused 3,617 attacks resulting in bodily harm out of a reported 5,242 incidents, or 69%.

We were able to uncover data displaying fatal dog attacks in the United States for a 16-year period spanning 2005 to 2020. Pit bulls were found to have been responsible for most of the fatal dog attacks over this timeframe, with Rottweilers a distant second. 251 of the victims were age nine or younger, with children aged 0-2 suffering the highest number (149) of fatal bites. 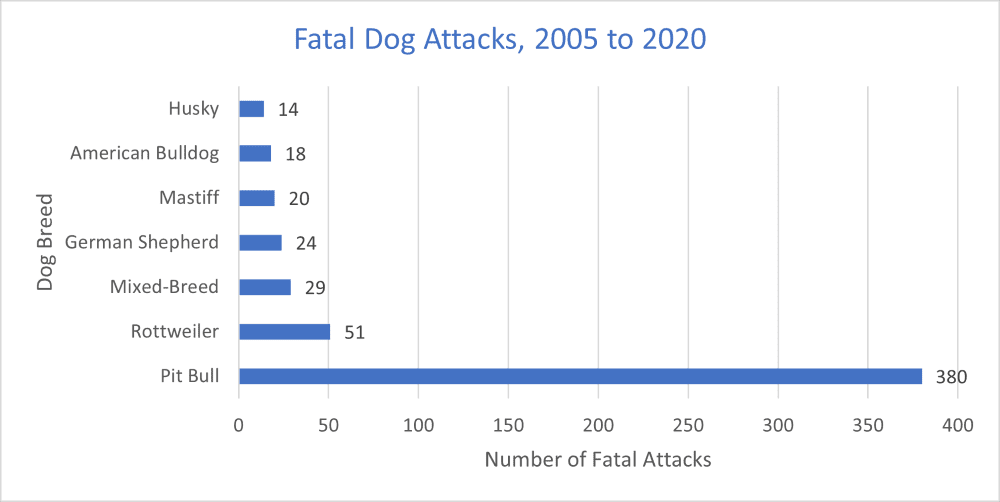 Underlying Circumstances of Dog Attacks Between 2005 and 2020

Breaking the data from 2005 to 2020 down further, we can see that over half of the fatal bites were caused by family dogs and that the major of incidents occurred on-property. Fatal attacks by a single dog were the most common, but a number of bite incidents involved two or more aggressive canines. Please note that the table below contextualizes the circumstances that led to all fatal attacks (~570) in several different ways. Therefore, simply adding up the values in “number of fatal attacks” will result in a much higher (and inaccurate) death toll than was actually reported in this timeframe.

Looking specifically at 2020, the most recent year for which reliable data has been collected and made publicly available, we can see that pit bulls continue to lead the nation in fatal bite incidents. Taking a deeper dive into the data, pit bulls (33 fatal attacks), mastiff-type war and guard dogs (3 fatal attacks), and additional bull breeds (4 fatal attacks) dealt over 80% of lethal bites. One-third of the victims were children nine years or younger. 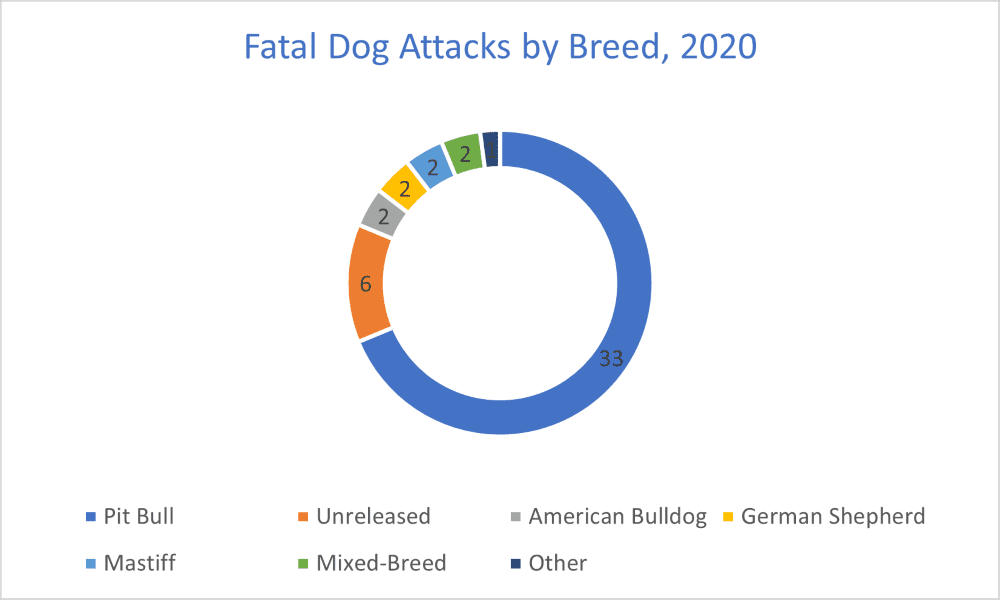 Which Age Group Suffered the Most Fatalities From Dog Bites in 2020?

Breaking down the proportions of fatal attacks by the victim’s age range, we can see that children aged 0-9 bore the brunt of lethal bites in 2020. Just under 33% of victims fell into this age bracket, which aligns with what we know about young children being at particular risk of incurring serious injuries from a dog. Somewhat unexpectedly, there were three victims in both the 10-18 and 19-29 age ranges, which see typically see less bite-related fatalities. All three of the victims in the latter category were male (aged 25, 26, and 27), and pit bulls caused all three fatalities. 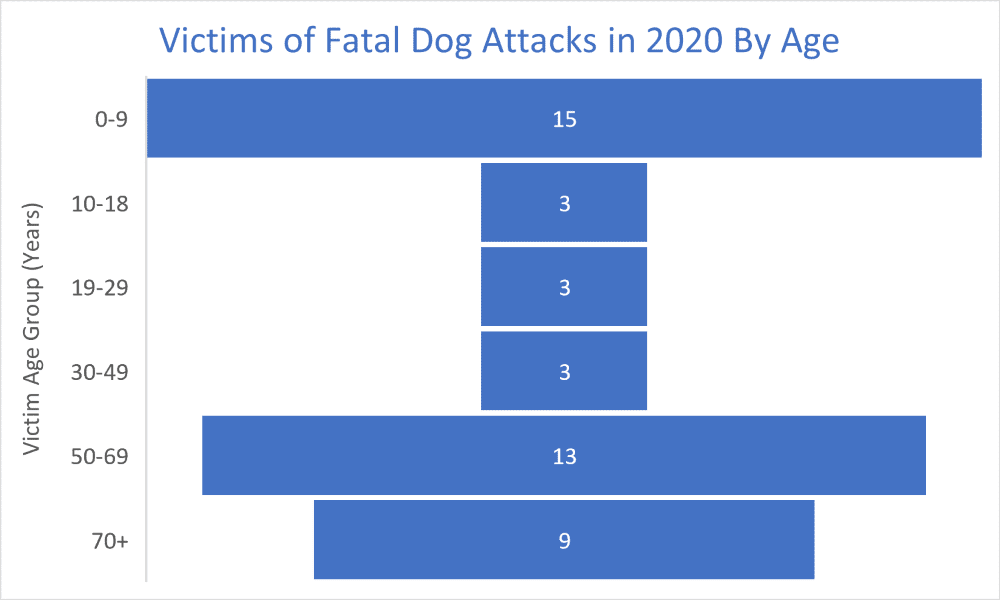 What is the Average Cost of a Dog Bite Claim in California?

Even if the victim of a dog bite survives an attempted mauling, they may suffer life-long injuries in the attack. Dogs are powerful and capable of inflicting lasting harm, particularly on young children and the elderly, who may be unable to resist or redirect the canine effectively. In 2019, there were 17,866 dog bite claims filed in the United States, totaling $802 million in value. According to data from State Farm®, the Insurance Information Institute, and the American Veterinary Medical Association (AVMA), California led all states with 2,396 dog bite injury claims. The average cost of an injury claim in the state was $51,264.60.

Do California Cities Have Breed-Specific Laws?

Not surprisingly, many California cities have breed-specific laws limiting the ownership and breeding of dogs that have been deemed dangerous or aggressive. Some cities forbid certain dog breeds from living in housing facilities, while other areas require mandatory sterilization. As of January 1st, 2021, the following counties and cities in California have passed laws to reduce dog attacks:

How Can You Protect Yourself & Your Loved Ones From a Dog Attack?

One of the best strategies to protect yourself from a dog attack is to reduce the chances of a bite occurring in the first place. You and your loved ones, including children, should familiarize yourselves with common signs of canine aggression, such as:

If you notice any of these warning signs, try to remain calm. Dogs may attack when they notice a fear response, so you should not run or turn your back to the aggressive canine. Some experts suggest standing indirectly of the dog and making yourself appear bigger, while not making eye contact.

Once a dog attacks, immediately shout for help. If a passerby comes to your aid, the dog may feel threatened and retreat. Dogs oftentimes clamp on the first thing they can get their teeth on, so you may be able to redirect the attack with a baggy article of clothing, a stick on the ground, or an object you’re holding. Protect your face and throat and ball your hands into a fist – a large dog may be able to sever a finger with a bite. If the dog bites and will not let go, do not panic and attempt to pry the dog off. You may worsen the injuries and, worse, not dislodge the canine. Try to overpower the dog and force it to release you.

If you’re bitten, no matter how minor the wound, see a medical professional as soon as possible. If the dog has rabies or another type of virulent infection, even a small wound may be life-threatening.