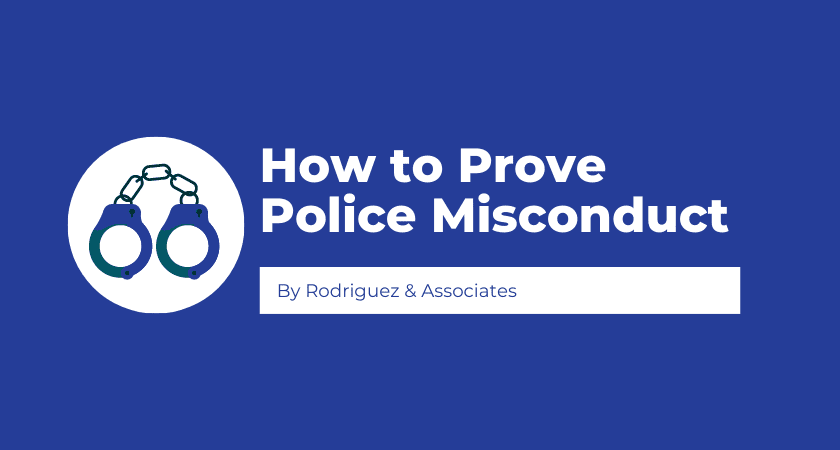 How to Prove Police Misconduct

Police misconduct occurs when a law enforcement officer commits an illegal act or exhibits inappropriate conduct when carrying out his or her official duties. From acts of police brutality to fraud or coercion, police misconduct can cause serious physical and psychological harm. If you believe that you are the victim of police misconduct, there are a number of steps you will need to take to protect your rights and prove your case with the help of a Bakersfield police misconduct lawyer.

Proving a Case of Police Misconduct

There are multiple pathways you can take to file a complaint against a police officer who commits an act of misconduct.

You can pursue civil and criminal charges against the offending officer simultaneously since they involve two separate proceedings in two types of courts. The burden of proof, or the evidence you will need to establish to prove that misconduct occurred, will differ based on the pathway you choose.

Internal investigations involve their own burden of proof, and you will need to speak to your local police department to determine how to file a complaint. If you are pursuing criminal charges, you will typically need to prove that the following elements are true beyond a reasonable doubt.

To accomplish this, you will need to gather enough evidence to prove the misconduct occurred. Different types of police misconduct are subject to specific legal considerations, so it is best to speak to a California police misconduct attorney as soon as possible. Your attorney will help you determine which pathway is right for you and advise you on how to best approach your claim.

What to Do After Experiencing Police Misconduct

Regardless of the type of charges you wish to pursue, there are a number of steps you will need to take to preserve evidence after experiencing an act of police misconduct. As soon as possible after the misconduct, take the following steps.

Speaking to a lawyer is vital to police misconduct cases. Your attorney will help you gather evidence, advocate for your rights during each step of the process, and craft a compelling case while adhering to specific legal requirements.

Different lawyers handle criminal and civil cases, but you can pursue both claims simultaneously. If you wish to file a civil lawsuit or criminal charges against the offending officer, contact the appropriate lawyer as soon as possible. 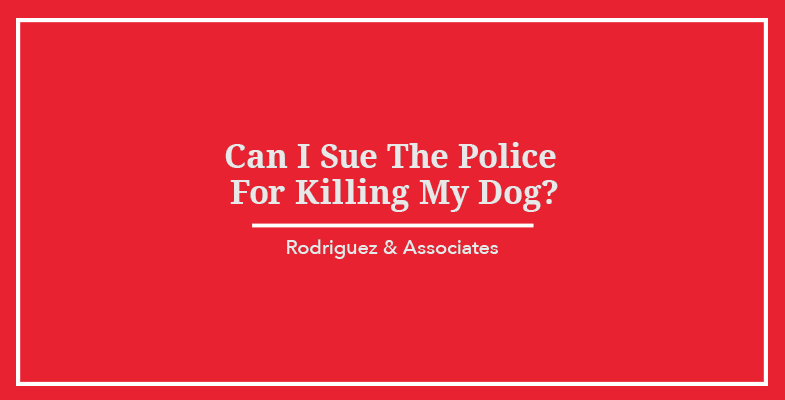 Can I Sue The Police For Killing My Dog?

Police officers receive training for many different scenarios, including those involving dogs. Unfortunately, mistakes can and do happen. The heat of the moment, a perceived threat, or miscommunication can all lead to the untimely death of a beloved canine. In these cases, a dog owner can take a few different types of actions to hold the officer/agency accountable and start the recovery process.

Possible Claims Against the Police

A pet owner can look at both federal and state laws to determine the right jurisdiction for a legal claim. Unless an officer commits an act of cruelty that results in the death of the dog, California remedies fall under property-related claims. Under Californian and most other state laws, an owner can sue for the value of the dog, any medical bills for the dog prior to death, and emotional distress. Animal cruelty deaths fall under a different category and may warrant a larger settlement.

Many dog owners choose to file claims against police officers in federal court as a Fourth Amendment violation (illegal property seizure). Depending on the facts of the case, the plaintiff may make an argument for illegal seizure and/or acts of excessive force. In a federal claim, a plaintiff may receive damages for costs associated with the death of the dog, owner mistreatment (if applicable), and personal emotional distress.

While these claims seem straightforward, law enforcement agencies enjoy many protections from both civil and criminal claims associated with dog shootings. Officers enjoy civil action immunity if they acted within the scope of the job and made a good faith attempt to honor an owner’s rights. Officers may also escape liability in claims if they can demonstrate adherence to agency procedures during the incident.

A law enforcement agency may attempt to settle a claim outside of court instead of fighting the accusation. Dog owners must carefully evaluate the settlement offer before accepting or rejecting it. An agency may only offer compensation for the “going rate” of the dog based on its breed, background, and age. This type of settlement may not cover the pain and suffering an owner experiences after experiencing the death of a canine companion.

What to Do After a Police-Driven Canine Killing

Dog owners can take steps immediately after a canine killing incident to protect their rights to compensation:

Law enforcement agencies do not keep data on the number of dogs shot, but one specialist from the Department of Justice’s Community Oriented Policing Services facility estimates officers kill 25-30 companion dogs every day. As social media draws awareness to the ongoing problem and more loving pet owners pursue legal action against the police, standard legal procedures may change. Instead of using lethal force, officers could substitute a non-lethal alternative and avoid unnecessary harm to animals and their owners.

Until law enforcement practices change, pet owners must understand their rights after a dog’s death. They can pursue a civil claim to agency perspectives and receive compensation for their losses.

The town of Bakersfield, California, is one of the deadliest in the nation – threatened by those who are sworn to protect it.

The city made national headlines in November 2014 when 200 people gathered on the streets to protest the death of James De La Rosa. The unarmed 22-year-old was tasered and shot multiple times by four police officers, creating a shockwave of outrage across the nation. But for locals, the news was sad – yet unsurprising.

Journalists at The Guardian first broke the story when they found that 13 people died at the hands of police in Kern County, home to just 875,000 people, in the first few months of 2015. In comparison, nine people died in all five counties of the NYPD’s jurisdiction, where the population is 10 times higher and there are 23 times more law enforcement officers at work.

A County Plagued by Violence

These facts don’t provide justification for the 54 police killings over the past decade in Bakersfield, however. Most of these killings were ruled as justified by internal review – judgments made by the same departments that employ the officers who fired the shots.

Eyewitness accounts of police behavior during and following police shootings point to gross misconduct and unethical behavior. Following the shooting of De La Rosa, a police officer was observed wiggling the corpse, which was resting on a hospital gurney. The police officer then said, “I love playing with dead bodies.”

Another police officer on the force killed three people within a three-month span in 2010, including an unarmed 15-year-old boy. Another officer had been involved in four fatal shootings between 2013 and 2015, including De La Rosa’s. None of the deceased were carrying lethal firearms when they were shot: two were unarmed, one was carrying a BB gun, and one was carrying a tire iron. In one killing, an officer opened fire on his own confidential informant during a planned operation when one of the criminals whom the informant was helping the police apprehend pulled out a gun.

A Lack of Departmental Oversight

Perhaps most astonishing is the lack of punishment and oversight for these officers. All were cleared by internal review, and the department itself has not been subject to external scrutiny. These killings and trends are a matter of public record, so why haven’t state and federal officials intervened to investigate foul play within the department? This is, in part, what is driving protests across the country. It represents a failure of not only the department itself, but the system as a whole, which allows unarmed men and women to be shot on the streets by those who have sworn to protect them.

None of these issues are easy to solve, but at the very least, they merit further investigation.

For victims and the families of police shooting victims in Bakersfield, there is another way to get justice. The police misconduct lawyers at Rodriguez & Associates handle police shooting cases and will fight to get you and your family compensation and hold the police department accountable for their actions.