“Clear the Shelters” 2022 with Rodriguez & Associates

Chantal A. Trujillo and Danay Gonzalez of Rodriguez & Associates, along with their dogs Penelope and Zola, invite you to Clear the Shelters on August 27, 2022.

They teamed up with KGET – TV 17 Bakersfield, an NBC Owned Television Station, and the City of Bakersfield Animal Care Center to raise awareness about the nationwide pet adoption event that helps find loving homes for animals in need.

Click here to learn more about the City of Bakersfield Animal Care Center. 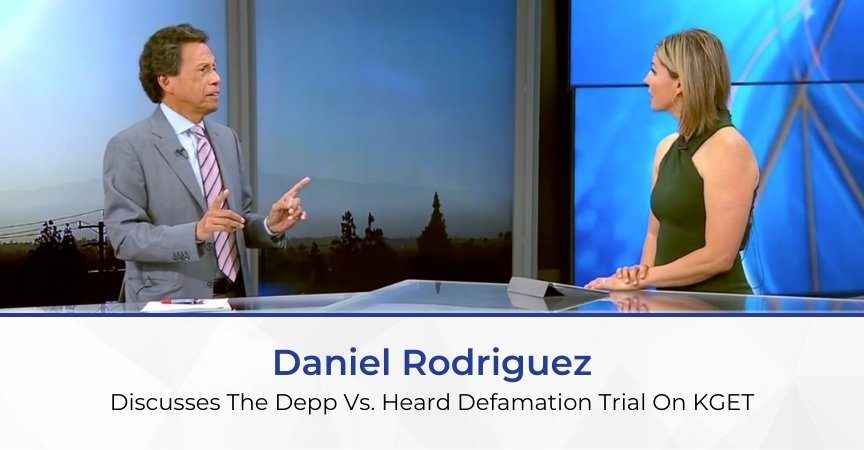 Daniel Rodriguez was interviewed on Sunrise with KGET – TV 17 Bakersfield about the Depp vs. Heard defamation trial. He talks about the importance of credibility and relatability in these types of cases as well as the influence of social media.

During a defamation trial, it is important that witnesses are seen as credible and relatable in the eyes of the jury. In the Depp vs. Heard trial, Amber was caught saying things that were found to be untrue and lost credibility.

As for being relatable – it is easier to vote against someone you don’t like; if someone is deceitful and disparaging, then it’s going to be hard to like that witness.

A defamation lawsuit is putting your character into evidence- how you live your life matters. Dirty laundry will be put out there, and in this case, not just the jury, the entire world was watching. It is important that the evidence you are providing is putting you in the right light.

Social media affected the Depp vs. Heard case. There are two main subsets of defamation: slander- what you say, and liable – what you have written. Now, social media plays a part – if you post false information or lie about someone and it hurts them emotionally and financially you can find yourself in a lawsuit.

You have to take accountability on social media. You can’t just post anything, especially if they are lies because they can come back to haunt you.

Daniel Rodriguez is the founder and president of Rodriguez & Associates, a Bakersfield personal injury law firm. He appears on KGET – TV  17 to answer common questions and help their viewers better understand the law.