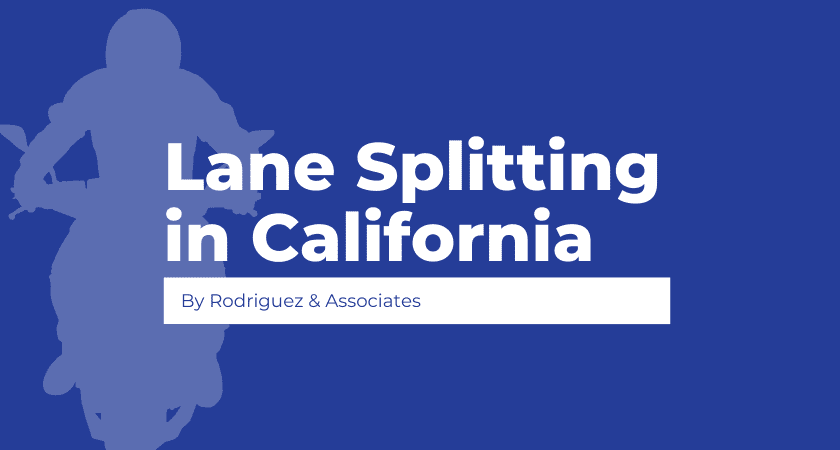 Lane Splitting in California: What You Need To Know

If you’ve ever been stuck in traffic and seen a motorcycle create its own lane by zipping between your car and the one next to you, you’ve witnessed what’s called lane splitting. It’s a common move for motorcyclists on freeways and crowded streets. It also causes its fair share of controversy.

Lane splitting enjoys a special privilege in California, one of the only U.S. states where the move is actually legal. While it’s a time-saver for motorcycle riders and, by some arguments, safer, lane splitting also causes a lot of tension on the roads. If not done correctly and carefully, it’s a risky move, and even when a motorcyclist is doing it responsibly, drivers of surrounding passenger vehicles often find it stressful and confusing.

The move’s legal status in California also complicates the process of determining fault when there is an accident involving lane splitting. Drivers of passenger vehicles should be aware of certain regulations — for motorcyclists and themselves — around lane splitting when they get behind the wheel. In the event of an accident, it is helpful to know these things up front.

In 2016, Gov. Jerry Brown signed Assembly Bill 51 into law in California, which officially made lane splitting’s status legal. The law defines lane splitting as “driving a motorcycle, that has 2 wheels in contact with the ground, between rows of stopped or moving vehicles in the same lane, as specified.”

Following the signing of AB 51 into law, the California Highway Patrol (CHP) developed certain guidelines around lane splitting, which were released in 2018. The CHP’s guidelines are meant to somewhat regulate the practice of lane splitting to make it safer for both motorcyclists and other vehicles around them. That said, they are guidelines only — not laws.

While none of these things are law, police can still ticket a motorcyclist that is driving recklessly while lane splitting. Riding on the shoulder of the road or freeway is illegal and never considered lane splitting.

The CHP also notes in its guidelines that “Lane splitting can be dangerous and extreme caution should be exercised” and that “The risk of death or serious injury during a lane splitting collision increases as speed and speed differential increases.”

In such an accident, any number of parties could be to blame: the motorcyclist, the other driver, even local government agencies.

As mentioned above, a motorcyclist can still be ticketed if they are driving recklessly while lane splitting. In the event of a crash, they could be held liable if they were not following the CHP’s guidelines. For example, the CHP’s guidelines instruct motorcycle drivers to avoid other cars’ blind spots. If your accident occurs because the biker was lane splitting in your blind spot, they might be at fault.

On the other hand, drivers of other vehicles need to make sure they are following a few rules themselves.

While lane splitting can be frustrating for drivers of passenger vehicles, because it is legal in the state of California, you cannot intentionally block someone from lane splitting. In fact, it is illegal to do so. If you are doing this and an accident happens, you could be held partially or even fully responsible for the crash.

Drivers should also be on the lookout for motorcyclists before they change lanes, and always use their car’s signals when turning or switching lanes. While these are common-sense practices in most driving situations, they are important to follow when it comes to sharing the road with those on motorcycles.

Sometimes, the fault lies elsewhere, like with the government. A great example of this is poorly maintained roads. If the road itself is not kept in good repair by the state of California, which in turn makes it more difficult for the motorcyclist to switch lanes, the fault of the accident could lie with a government agency.

More often than not, the fault will lie with no one single party and will be a combination of multiple factors. However, in order to receive the compensation you deserve after this type of accident, it is best to consult an attorney. This person should not only have experience with car and motorcycle accidents, they should ideally have handled past cases involving lane splitting. Determining fault and filing a claim for compensation especially in this case can be a challenging process. To minimize your frustrations, seek the help of an experienced professional.

Rodriguez & Associates has long been committed to helping drivers protect their rights and receive the compensation they deserve from motorcycle accidents. If you or a loved one has been involved in a crash, please reach out to us today ((661) 323-1400) for a free consultation.

What Is the Difference Between Punitive Damages and Actual Damages?

In a personal injury lawsuit, you have the right to collect compensatory damages for losses you suffered in an accident that was not your fault. The aftermath of these accidents can leave us with unexpected medical expenses, lost wages while we are healing, property damage, emotional anguish, and more – and filing a lawsuit provides a pathway to recover from these significant damages. There are many types of damages you can claim, including actual damages and punitive damages.

What Are Actual Damages?

Actual damages refer to the financial, physical, and emotional losses you suffered as a result of the accident. They make up the bulk of the settlement that the court can award you at the conclusion of your case, and seek to help you restore your financial standing to what it was prior to the accident. To claim these damages, you will need to prove that the accident was the direct cause for them.

Actual damages come in two categories: economic and non-economic. Economic damages refer to the tangible financial losses you suffered from in the course of the accident. You can prove these damages in court by supplying invoices, receipts, and bills. Common economic damages include the following.

Courts calculate the amount of the non-economic damages you can claim in different ways. In most situations, the jury will examine the facts of your case after your attorney proves that the at-fault party is the cause of your injuries. Based on your case, the jury will assign an amount based on a combination of evidence and reasonability.

What Are Punitive Damages?

On the other hand, the court does not intend for punitive damages to restore your financial standing to what it was prior to the accident. Their purpose is to punish the at-fault party in your case for dangerous, reckless, negligent, or intentional behavior. At the conclusion of your case, the at-fault party will have to pay punitive damages on top of actual damages – they will not affect the outcome of your settlement.

The court will determine whether or not the at-fault party acted in a way that warrants punitive damages and makes a decision on the amount he or she will have to pay. The amount can vary based on the circumstances of your case, and the more severe cases typically result in a higher amount of punitive damages.

Do You Need an Attorney for Your Personal Injury Case?

Calculating these damages and knowing exactly how much you can claim in civil court can be difficult. You may forget about a certain line item that you could claim as an economic loss, or remain unsure of whether or not you qualify for non-economic damages. If you are filing a personal injury lawsuit, consider hiring a personal injury attorney to assist you with your case.

If you are grappling with the aftermath of an accident caused by someone else’s negligence or reckless, you have legal options available to you. Depending on the circumstances of your case, you may be able to claim actual and punitive damages for your losses. If you have not done so already, contact a personal injury attorney to discuss your case and to begin the filing process.

As a motorcyclist in California, it’s your duty to know the laws that apply to you and obey them. It’s also your right to stand up for yourself when you know you were following the rules and still ended up in an accident. Having a thorough understanding of California’s motorcycle helmet law can give you confidence and control when you hit the open road and a solid foundation should you need to hire a Bakersfield motorcycle accident lawyer and file a personal injury claim. You’ll know exactly when you were in the right. Here’s an overview of what you should know.

Do You Need a Helmet in California?

Yes. California is one of 19 states that require all motorcyclists to wear helmets. California Vehicle Code Section 27803 states that a driver and any passenger shall wear a helmet that meets federal safety standards when riding on a motorcycle, motor-driven cycle, or motorized bicycle. It is unlawful for a driver or a passenger not to wear a helmet at any time while on a motorcycle in California. The law applies to motorcyclists on rural and urban roads and highways. It is a statewide, universal law that applies to all ages.

“Wearing a safety helmet,” means the helmet must comply with federal laws, and fit snugly on your head. Look for the Department of Transportation (DOT) sticker when purchasing a helmet, or another indication that the manufacturer complied with federal safety standards in the creation of the helmet. The helmet must be of a size that fits the wearer’s head securely, without excessive movement, and fastened with helmet straps. The law does not apply to those on fully enclosed three-wheel motor vehicles over seven feet in length and four feet in width.

While California’s current law makes it mandatory for everyone to wear a motorcycle helmet, the law could be changing in the future. In 2011, Assemblyman Chris Norby introduced Assembly Bill 695. AB 695 proposes an amendment to the existing motorcycle helmet law, wherein a person who is 21 years or older who has either completed a safety training program or received authorization to operate the vehicle with a class M1 license or endorsement for two or more years would not have to wear a motorcycle helmet. This amendment is currently pending.

Penalties for Not Wearing a Helmet

Motorcyclists and their passengers can face fines and penalties for failing to wear approved helmets while operating in California. The law states that an enforcement officer has the right to either charge the individual with a simple equipment violation or a greater penalty. An equipment violation is a $10 fine with a proof of correction, according to the California Vehicle Code. The California Highway Patrol, however, states that a violation of the helmet law is an immediate safety hazard and is therefore not correctable.

If the officer were to follow the CHP’s guidelines, you could face up to $250 in fines and one year of probation. It’s largely up to the arresting officer, as the laws are unclear. Avoid any penalties and protect your personal safety by wearing a motorcycle helmet in California. It’s currently the law, and it could save your life. 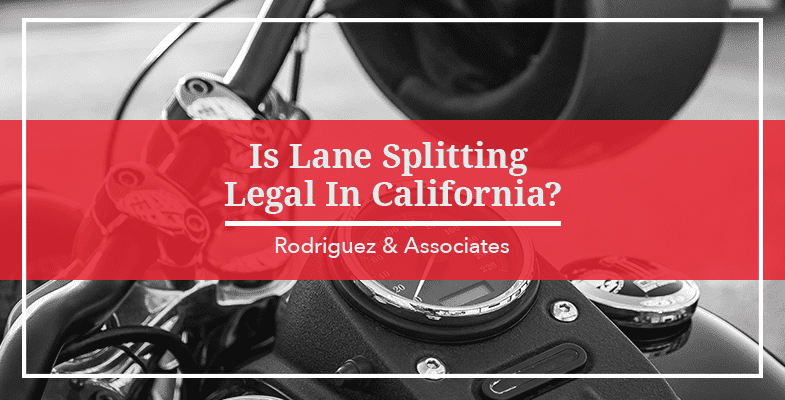 Is Lane Splitting Legal in California?

Lane splitting, also called “lane sharing” or “white-lining,” describes a motorcyclist cutting between lanes of slower-moving traffic, or pulling in front of stopped traffic at a red light. While this may sound dangerous, it can actually help improve the flow of traffic and allow motorcyclists to escape congested areas where they are more likely to get into motorcycle accidents.

California allows competent, experienced motorcyclists to lane split as long as they follow a few guidelines:

Lane splitting is legal in California and can sometimes help other drivers by alleviating traffic congestion. However, it’s important for California motorcyclists to understand the risks of lane splitting and only do so when conditions are safest. If you or somebody you love was injured in a motorcycle accident, reach out to a knowledgeable personal injury attorney in Bakersfield.