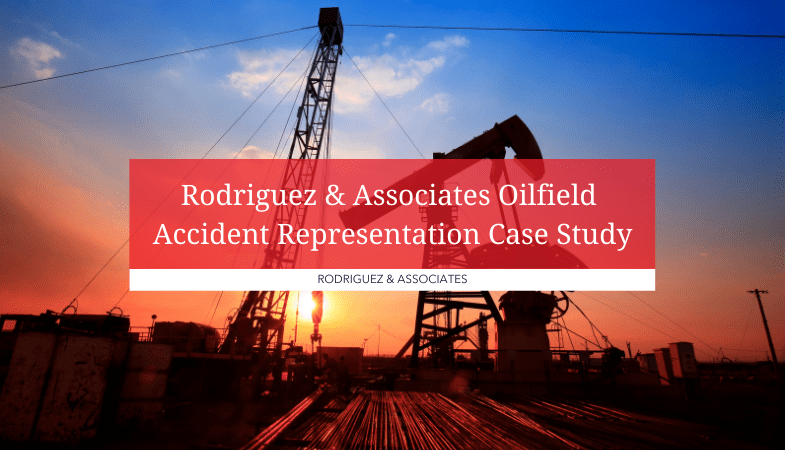 California resident Seina Zamudio came to Rodriguez & Associates after her husband, Oscar Zamudio, a veteran oil man loved by both his job and family, died from an accident on a drilling rig outside of Ventura, California in 2011.

The business of oil extraction is a dangerous one, with many disasters and fatalities on record. In Oscar Zamudio’s case, the rig itself turned out to be the cause of the accident that took his life. Rodriguez & Associates’ oilfield accident lawyers successfully represented Seina and her three minor children in a products liability case against the rig manufacturer.

This rig was constructed to move up or down on an A-frame that required two pins, one on each side of the frame. The first pin was meant to be removed and replaced in the frame as workers operated the rig. The second was never supposed to be taken out of the frame, as doing so could release the spreader beam, which weighed thousands of pounds.

For this rig, the International Association of Drilling Contractors had issued a warning in 2007 that if the wrong pin was removed from the A-frame, the spreader beam could detach and potentially crush someone.

Tragically, that is exactly what happened to Zamudio. On the afternoon of September 26, a dismantling operation was underway when a worker accidentally removed the wrong pin from the A-frame, causing the spreader beam to fall and trap Zamudio against the rig. Coworkers rigged straps over the beam to lift it off Zamudio and administered first aid until an emergency crew arrived at the remote drilling site. Zamudio was pronounced dead at 6:10 p.m. on September 26. An autopsy revealed he had died from crush injuries to his pelvis.

Rodriguez and Associates Partner Chantal A. Trujillo represented Seina Zamudio and her three minor children in this case. For this product liability case, Trujillo looked at three specific criteria:

Rodriguez and Associates argued that the Rig Manufacturer could have designed the problem out by welding the second pin to the frame, thereby making it impossible to remove. When the company said they could not weld it, our firm pointed out that the second pin, which was never to be removed, could have been made a different color to differentiate it. The manufacturer was unable to come up with a compelling rebuttal to this logic.

The Rig Manufacturer ran two motions for summary judgement to get the case thrown out and failed both times. The case was eventually settled out of court in October of 2015 for a confidential sum.

Rodriguez and Associates is founded on the values of helping those most in need and treating each client like a family member. In keeping with that, the firm has maintained a close relationship with Seina and her children long after the case was closed. For example, in 2019, years after the accident, we gave Seina tickets to see the LA Dodgers versus the SF Giants as a way of continuing to say thank you to her and her family, and for trusting us to represent them against the wrongdoers in this case.

Everyone dealing with the loss of a loved one after a wrongful death deserves the chance to get the help they need in the fight for justice. If you are a victim in a case of personal injury such as wrongful death, Rodriguez & Associates stands ready and waiting to assist you.